Andrew just left for a month of freelance up in Portland, so last night we had a fancy (by my standards, anyway) farewell dinner, which I cooked while he finished our self-employed taxes on the fly — yes, our horrifically complicated taxes are finished in March, I love that man. His reward was stuffed mushrooms adapted from How to Cook Everything, fresh tomatoes with basil, sesame albacore tuna, and grilled asparagus. I also got a bottle of champagne as kind of a last-second splurge but it turns out that buying it put us over the top for the Ralphs wine club (whatever that is) and now we have a $10 gift certificate for wine there. So that was cool. And it turned out to be good champagne, too!

The sesame tuna was inspired by my favorite dish at my favorite restaurant here in LA, the Kitchen. I’ve ordered it so many times and I just love it. So I invented my own version and it turned out really well! The instructions (amounts, cooking time, etc.) are pretty flexible depending on how rare or cooked you like your fish — I don’t really measure things when I’m cooking, either, so I did my best to guess at it all.

No pictures of dinner last night, but here is one of the two of us having a ridiculously huge lunch at a pub in Glasgow two years ago, just so you have something to look at besides text on a white background. 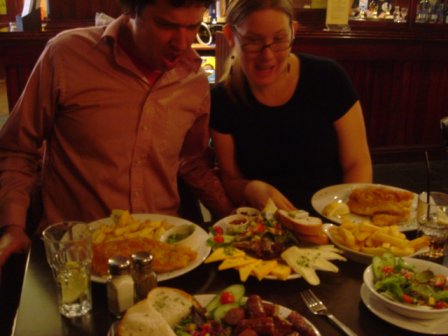 Two dinner plates for dredging and coating, and a frying pan for sauteing

1. Mix about three parts sesame seeds to one part other spices on a large dinner plate. You’ll need a good amount for coating several large pieces of fish — but you can always add more later though. Go ahead and pour some olive oil into a large frying pan and heat it over a medium flame.

2. Cut the steaks into large strips about an inch and a half wide and put them on the other dinner plate — two steaks turned into six strips for me. Dredge each one in the beaten egg so they’re well coated.

3. Now coat them in the sesame mixture one at a time, covering all four sides and both ends. Gently place them one at a time into the pan. If the sesame coating is sticking to the pan, add a little more olive oil. (And not to sound like your mom, but make sure you wash your hands really well to get all the raw egg off, too!)

4. Use tongs or a spatula to rotate each piece to a new side every minute or so, so each side gets a little browned, but not burnt. If you like your tuna rare, take it off the heat now. If you like it cooked through, keep rotating it over the heat for longer — you can always slice one open to see how rare the center is. When it’s finished cooking, squeeze a little lemon juice over it.

5. Serve it hot — the sesame will be so crispy and delicious.

After dinner we watched LOST (man, I thought that was a good episode — it freaked me out!) and then watched Star Wars for about the millionth time. Love Star Wars!

A bonus is that since Andrew and I are the same exact age and both grew up as huge fans of all the Star Wars movies, we always reminisce over which action figures we or our brothers or our friends had. How huge of fans are we? Well, from that same trip to Glasgow, here we are at the midnight premiere of Revenge of the Sith — five hours before anyone in the US got to see it, which was kind of cool. Not my favorite of the six but it was exciting to see it in the theater in the middle of the night anyway! 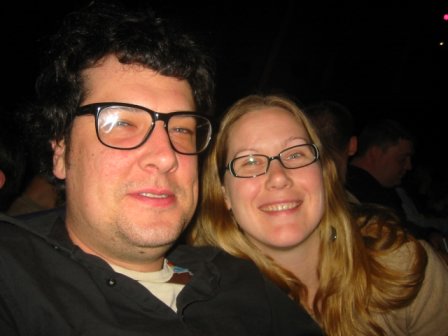 And then thanks to Pink is the New Blog, I saw that the USPS is doing a new Star Wars stamp series and turning 400 mailboxes nationwide into R2D2s to celebrate! Can’t wait to see them, I must find out where the closest one is… 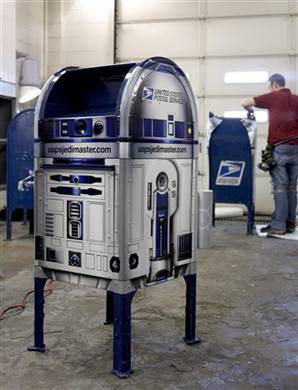 p.s. Did you know that Star Wars offers free craft projects online? That almost makes up for Jar Jar Binks, as far as I’m concerned!

lots of things going on this weekend Craftwork goes green