It’s been years (literally) since I’ve had a chance to sew this much, and I can hardly believe I’ve actually gotten to make or mend a few things that didn’t have a deadline attached to them. I wanted to share a few photos of the projects I’m the most excited about… 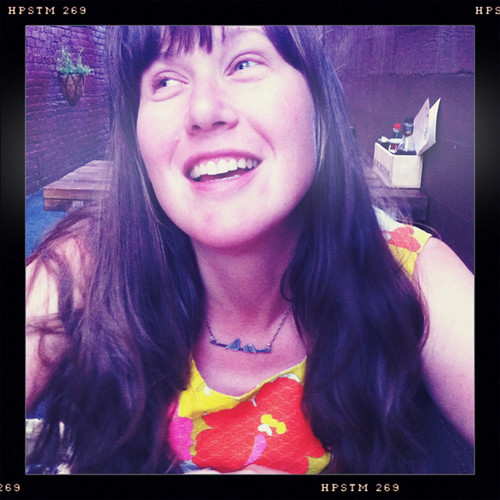 This vintage dress, which was a $5 Rose Bowl treasure, had been on the long-neglected mending pile since 2007 (?) with a broken metal zipper. After moving everything in my craft room downstairs and finding it again, I stole half an hour, dipped into my newly organized card catalog of notions, and put in a new zipper. I have never loved my little Pfaff more than when I was zipping along on this project, realizing I was going to get to wear it out to dinner in ten minutes when the babysitter got here (it was the evening of our sixth wedding anniversary). I usually don’t post many photos of myself, but here I am very happy, and just so glad to be wearing this dress again instead of losing it to the perma-pile. 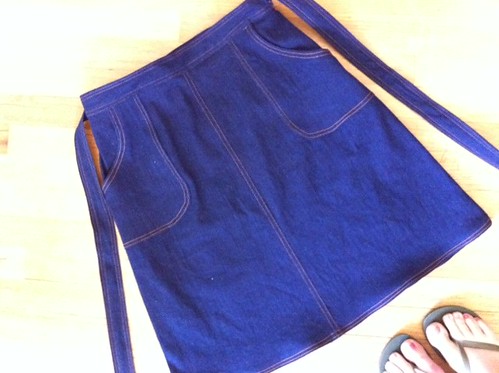 My favorite thing I’ve made in forever is this denim wrap skirt. Love the pockets, which hold an iPhone and keys perfectly, love the a-line, and love the total simplicity of it. I’m also kind of amazed that I finished it after all this time… I prewashed the fabric and cut all the pieces out in summer 2007, right after we moved back to Portland. Then I found out I was pregnant (the first time), suddenly got the chance to write another book (Button It Up), and reluctantly put the skirt project away to whenever I could fit it in time-wise, not to mention fit into it body-wise. Two more books, a house move, a craft room move, and another baby later, I got those long-forgotten pattern pieces back out (I really thought this one might end up in my crafty estate sale for someone else to finish a few decades from now) and started sewing. 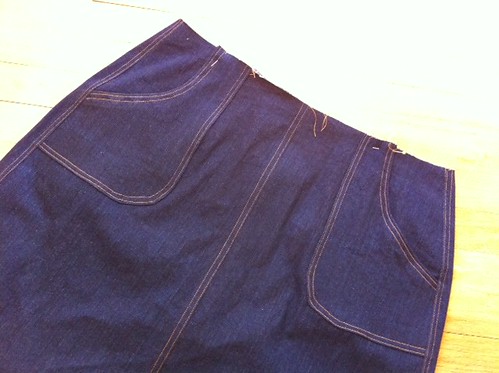 I love top-stitching. I find it so relaxing to just go forward with these neat, even lines. This is kind of a dream project for me, I guess – three full bobbins’ worth of relaxing! The skirt is sturdy denim, top-stitched basically everywhere, and almost architectural on. I’m not nearly as worried about a sudden gust of wind as I would be in some adorable light, frothy thing. But a well-placed safety pin never hurts… 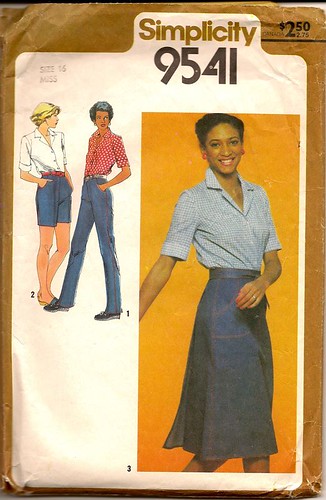 Anyway, I’m hoping for a good photo soon, but none of my mirror ones turned out, so I’ll update when I have someone around who is not three or nine months old and can take a decent picture of me wearing it. Oh, and I lost the pattern envelope sometime in the last four years (unsurprising) so the vintage pattern wiki page was awesome for reference – it’s Simplicity 9541. My only tweaks were shortening it 5 inches to just below/at the knee, and a few of my own attempts to set the waistband, etc. differently than the 1980 “UNIT 6” approach I couldn’t really get my sewing head around. 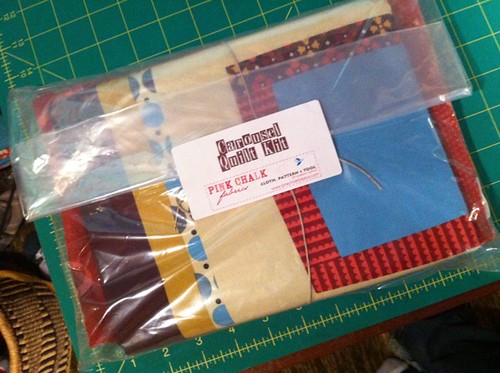 Next, I finally got started on the Carousel Quilt kit I bought from Pink Chalk Fabrics a couple years ago, which is a charming pattern Kathy designed, built around the Denyse Schmidt County Fair cheater print panel. It’s stitching up super fast but I didn’t have a chance to finish piecing it last time I had childcare. Next week for sure! 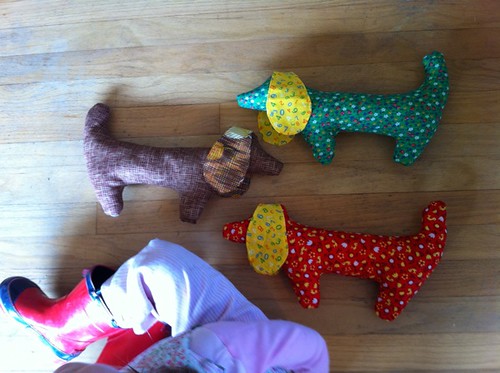 I also mended a pair of Pearl’s old cowgirl pants (my favorite kids’ pattern, Burda 9772), hemmed a pair of Andrew’s cords, and then jumped into Mic-Mac part 2. I sewed Pearl a brown George the Puppy from Girl’s World a little while ago, which she promptly named Mic-Mac, and then requested “so many more Mic-Macs.” 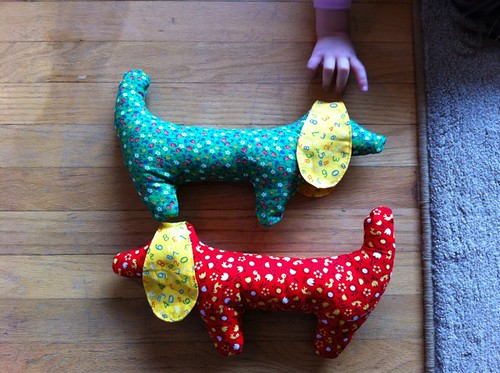 So I cut a couple more out last week (a red one for her and a green one for Alex, both with yellow number-print ears), and sewed and stuffed them on Monday. Well, I think I’ll be making another green one for Alex, because Pearl loves the trio of Mic-Macs, and they are basically partying together all day long. 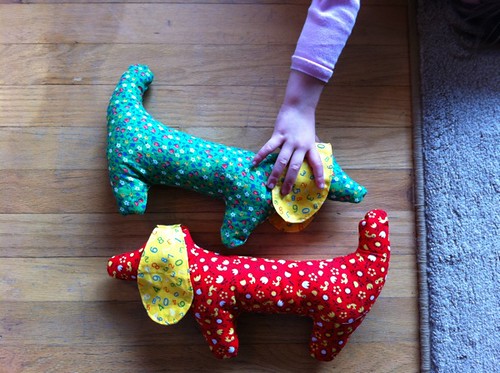 She lines them all up, she tells me stories about them, and they go on trips together. Not bad for a project that takes much less than an hour and a quarter-yard of fabric. Actually, you could probably make two in an hour or so, if you didn’t have to change thread colors. (My only tweaks were top-stitching the ears, and I didn’t clip curves this time since the seam allowance is only 1/4″ and I had a hard time not cutting too much on the brown Mic-Mac.) 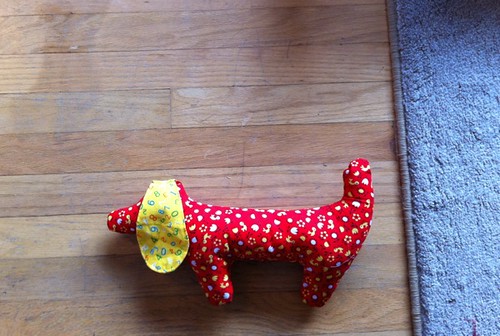 So, now that I’ve caught up on some sewing to-do’s (to say the least!) I went to JoAnn Fabrics in search of Denyse Schmidt‘s new line Sugar Creek. Here is what I found at the Eastport store in Portland on Tuesday: 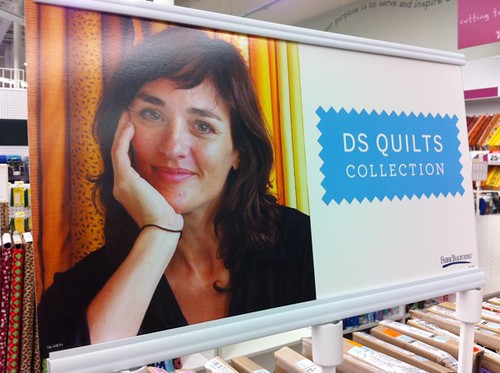 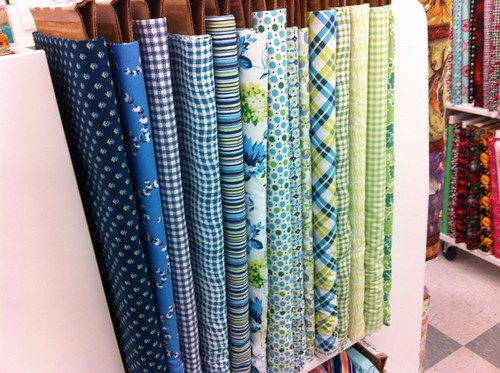 Not a ton of Sugar Creek in the mix, but yay, there was some Picnic (which I wasn’t expecting to see again) so I snapped up three yards of this very-favorite print, plus a new Lisette pattern – Continental, for the cute dress: 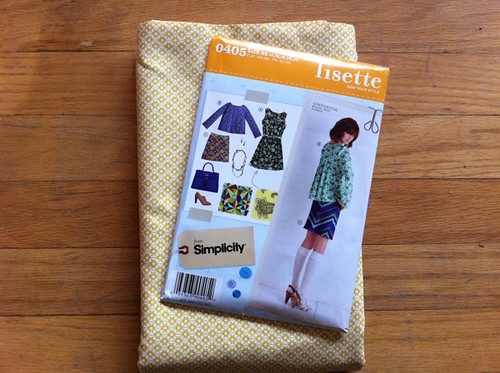 So, we’ll see when I have time to make it (hopefully in time to wear it at least once before sweater weather officially descends). By the way, I bought the Lisette Market pattern (for the adorable a-line skirt) at JoAnn a few weeks back too and I’ve already lost it! If you know any finding-things charms, I’d love any good thoughts. I want to make that skirt… 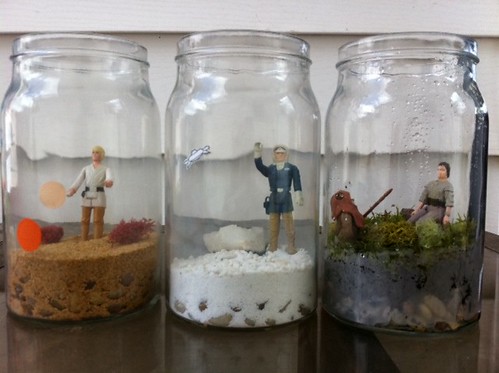 Oh, one more project (no sewing involved). My dear friend Alison came over last week and we made terrariums, so I got to re-make my Star Wars Terrariums from World of Geekcraft. I had disassembled them all in 2009 to send the action figures and rocks and sand away for the photo shoot and I was missing them so much. So she made wedding centerpieces, and Pearl and I made my Star Wars worlds again. Yay! 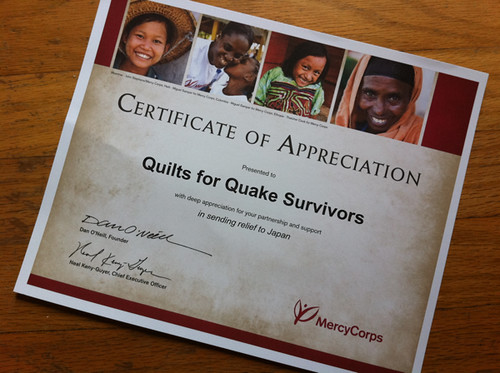 PS: If you have been following or helping with Quilts for Quake Survivors (thank you!!!) I put a new post up on the blog a couple days ago, about our last sewing party and final push to raise money for Mercy Corps and donate the remaining quilts. You can check that out and add your two cents over there if you’d like to.

PS again: If you are into these things, I’m finding the one minute to post things on my craft writer page on Facebook or my new twitter a lot more often than the hour or whatever for a real, full-on blog post with pictures over here. So please say hi over there if you’d like to!